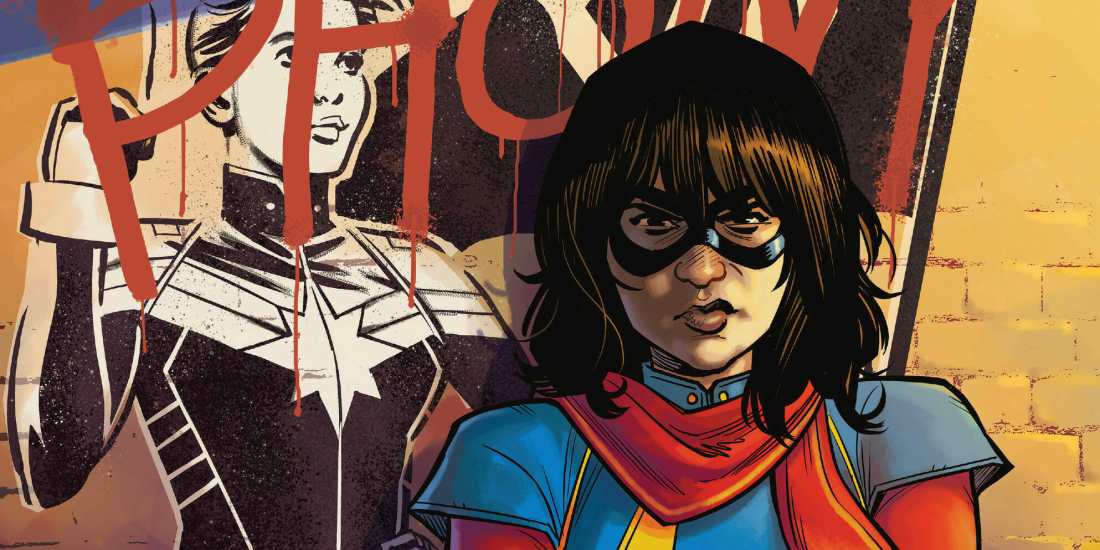 In the aftermath of the massive culmination arc Civil War II, Kamala Khan (Ms. Marvel) a Muslim teenager and the rising star of the Marvel world, feels disillusioned with her super elders. After being thrust into a conflict between Tony Stark (Iron-Man) and Carol Danvers (Captain Marvel) over the very future itself, Kamala moves into a higher tier heroics. When the dust settles, she accepts an invitation to join the All-New Avengers comprised of Jane Foster (Thor), Sam Wilson (Captain America), Vision, Hercules, and Miles Morales (Spider-Man).

If you wondering why the line up for everyone’s favorite super hero team seems so… inclusive, well, I attribute that to many things but mostly it was two men. The first being Brian Michael Bendis, one of Marvel’s chief editors/writers from 2001-2017, who reated Jessica Jones, Miles Morales, and Riri Williams (Iron-Heart) in an effort to present heroes that actually reflected Marvel’s diverse audience. The second was America’s first black president, Barack Obama. His mere presence in the White House altered our conception of what power looks like in this country, and its effects reverberated deeply within Marvel comics, but that’s another post that I’ll write later on. When you consider that every Avengers film to date crossed the billion dollar mark with ease and that the Avengers are arguably more well-known among mainstream audiences than the Justice League and X-Men, you can see how important it is for greater representation in the roster, since what happens in the comics inevitably finds its way to the big screen. I mention this because with Bendis’ departure from Marvel comics and the recent promotion of C.B. Cebulski, a white man with a history of using a Japanese pseudonym to conceal his race in order to sell his work, to Editor-in-Chief, things have changed. Jane Foster is dead and Sam Wilson was demoted back to Falcon in favor of his white mentor and former captain, Steve Rogers. In the greater Marvel world, Amadeus Cho and Riri Williams were both stripped of their respective titles– The Incredible Hulk and The Invincible Iron-Man, only to be replaced by their white predecessors. What?

Amidst the shake-up, a new title began to blossom. Well, not entirely new. In its original run from 1975-78, The Champions was a hodgepodge team comprised of Ice-Man (of the X-Men), Hercules, Ghost Rider, Black Widow, Angel (of the X-Men), and Darkstar. Its short run of 17 issues saw twelve different writers and several artists. The run had vague intentions of being an ‘every-man’ sort of team, though that never really materialized. Fast forward to 2016, a year marked by mass outrage over police killings of unarmed and innocent black men and women, an ever increasingly economic inequality, and the election of Donald Trump. The times called for a new class of heroes. Out on a mission with the Avengers, Kamala Khan, grows discontent with the smash and apprehend model of her team. In a courageously brave move, she resigns and forms her own team, The Champions.

Summing up their mission she states:

“We see it all around us more and more every day — people with power punching down. Taking lives when they don’t have to. Meeting unarmed perps, even unarmed kids, with lethal firepower. That’s the world we’re inheriting, where violence does all the talking. But we can be better than that. We have to start enforcing justice without unjust force. What happened here today was sickening. And stuff as bad — worse — happens every day in this world. The strong abuse the weak — who have to worry more all the time about who they can trust and who they can’t. You want that to change? Us, too. We’re in a war for a better tomorrow. Join us. Help us to not take the easy road, and I promise we’ll fight every fight they can throw at us. Help us win the hard way — the right way — not with hate, not with retribution, but with wisdom and hope. Help us become champions.”

While these missions usually result in a show of physical strength, the struggle is largely one of internal growth. They pass through many of the teenage rights, with parental disputes and the search for identity. One of my favorite moments happens when Scott, a mutant, tells Kamala, an Inhuman, that despite the prejudice between their two races, he feels no hate toward her and she smiles, saying she feels the same. It’s a small moment with immense weight. We feel their internal conflict, and with no elders around they must decide for themselves who they are and what they believe. I also love the development of Viv as both an android and a teenager. There are several heavy handed metaphors like when she tries avoid processing trauma from previous missions by disabling part of her emotional core, only to have it overflow and send her into a state of mental paralysis in the middle of a fight. These stories don’t shy away from the heavy. More than anything else though, The Champions aren’t seeking to enforce their will, no, they are working to build a better world and that often means collaboration.

As time goes on, the team is assisted on missions by Gwen-Pool, Lunella Lafayette (Moon Girl), Devil Dinosaur, Rayshaun Lukas (Patriot), Joaquin Torres (Falcon II), Red Locust, and Nadia van Dyne (Wasp), and grants permanent appointments to Riri Williams (Ironheart) and Amka Aliyak (Snowguard). I could go into great detail about how the team is led by a woman of color or how they fight nationalism and xenophobia. I could talk about how some members are indigenous and others are undocumented. I could talk about how the team is predominately people of color and female, or how its story-lines are actually relevant to our current age and not another recycling of the line-up that made Marvel famous forty years ago. But! I don’t want to spoil too much.

Now on Issue #23 with a new writing/inking team at the helm, the story lines are as strong as ever. Recently, we saw the debut of Riri’s new armor and Amadeus’ new form, Brawn, and the team has accepted a call for assistance from a small village in Tanzania. As it stands, with the cancellation of Roxanne Gay’s World of Wakanda and Gabby Rivera’s America, both of which centered on Queer heroines, The Champions is Marvel’s last bastion of progressive titles. So, it needs your support!

What are you waiting for? 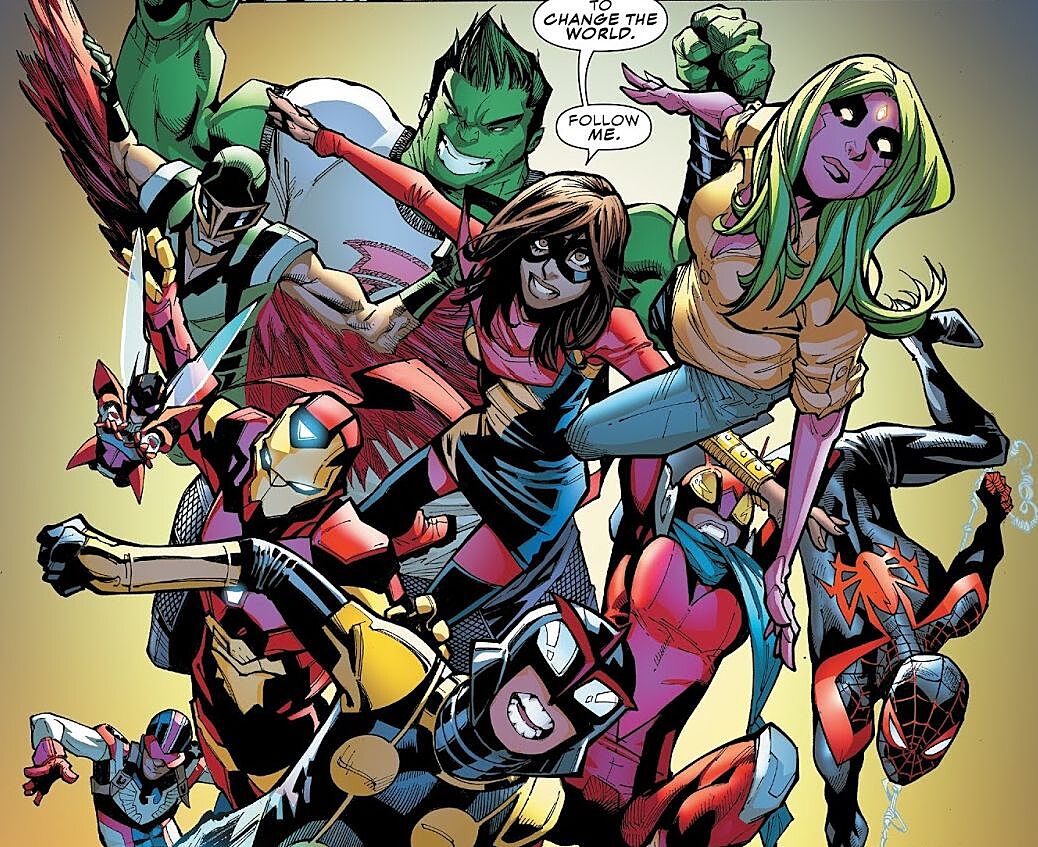