Paisan (Paisà) is Italian slang for a fellow countryman, a compatriot.

It was the image of Joe (Dots Johnson), an African-American MP, and Pasquale (Alfonsino Pasca), an Italian child and ‘orphaned street urchin,’ that really put the hook in me. With just a few Italian Neorealist films under my belt, I saw a clip of the odd duo planting themselves atop a heap of rubble on the battered streets of Naples and knew this was one for me.

Any time any film before 1970  humanizes black actors, I want to know more. It lights up the hopelessly naive part of my brain eternally seeking some sort of racial reconciliation. This is probably why audience keep turning up for films like ‘Green Book’ despite their surface level and often antiquated reading of race relations– not to mention the controversy. Paisan is not one of these films. It’s actually six vignettes (roughly 20 mins each) about six sets of characters, Joe’s story being episode two. So let’s talk about it. 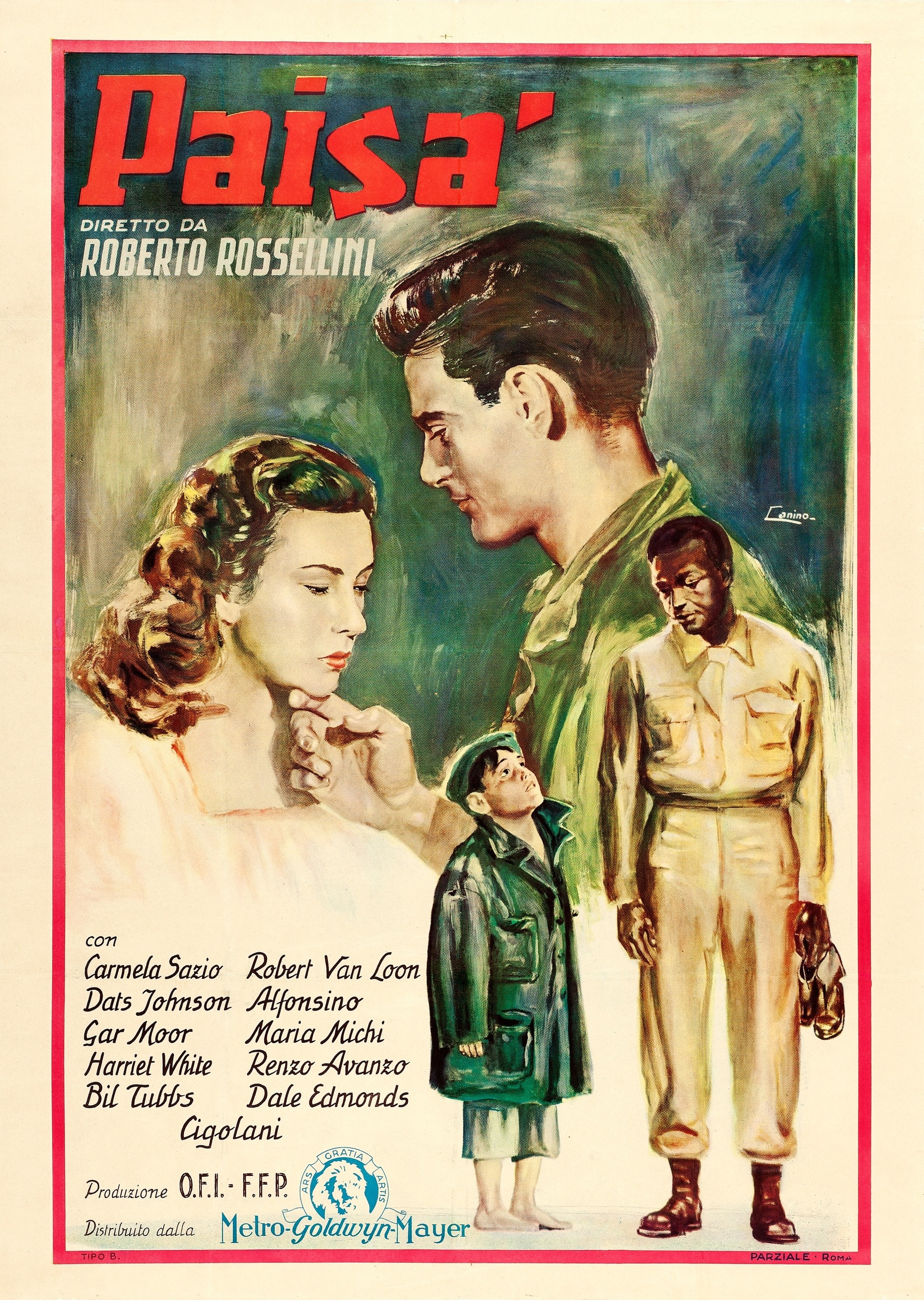 Episode two takes us into the aftermath of the Allies capture of Naples (circa late 1944). A group of children roam the streets in search of materials to barter or sell. Pasquale, a young orphan, is presented with the opportunity of obtaining a ‘negro.’ *cringes* Tagging along with the other children, he soon meets Joe, a heavily inebriated American solider. Pulling Joe along, the two stroll through the garbage strewn streets of Naples before scaling a mound of rubble and discarded aluminum cans. Pasquale shows Joe his harmonica and Joe tries in vain to play, choosing instead to sing a verse from ‘Nobody Knows The Trouble I’ve Seen.’ In a drunken role-play, Joe takes Pasquale (who he refers to as Paisan) through an idealized version of Allied victory over the Axis powers. Not only does Joe assist in ultimately defeating the Axis powers, he’s personally congratulated by a general and flown back to New York City for a ticker tape parade. Joe’s not selfish, he tells Pasquale he can tag along as they visit Wall Street and Manhattan. In this scenario, he even offers to introduce Pasquale to New York City’s mayor.

As the minutes pass in episode two, it would be easy to look past Joe’s dark skin and see simply another G.I. physically and emotionally shaken by the second World War. Past the first mention of race when the children tell Pasquale he can sell a negro, race is not explicitly stated nor discussed, and yet it is this unique inclusion of an African-America from which the story derives its superior depth. The second world war was a brutal conflict that reshaped the entire world. Millions died fighting and millions more were crushed between the gears of its machinations. Despite unequivocal victory, tens of thousands of men returned home with what we now acknowledge to be PTSD. It was hard on everyone. But there is a particular bitter irony for African-Americans fighting in the war, just as there had been in the first World War, the Civil War, and nearly all wars stretching back to the American Revolution. History shows us that black veterans returning home from the second World War faced harassment, physical harm (including lynching), and were still barred from entering white restaurants, clubs, and schools.  The G.I. Bill which famously uplifted a whole generation, failed miserably at assisting blacks.

All of this to say, things aren’t looking good for Joe– and it shows. Starting out with great gusto, things peter out when reality sets in and Joe bemoans his return home with all the anguish one might expect from someone who sees war as something of a reprieve. “I don’t wanna go home. I don’t wanna go home. My home is nothing but an old shack. I don’t wanna play no more, Paisan,” he says, leaning back with all the fatigue in the world. In brutally honest moment of levity, Pasquale warns Joe not to pass out or he’ll steal his shows, and of course this happens.

“Looky here, America, what you done done? Let things drift until the riots come. Now your policemen let your mobs run free. I reckon you don’t care. Nothing about me. You tell me that HitIer is a mighty bad man. I guess he took lessons from the Ku Klux Klan. You tell me Mussolini’s got an evil heart. Well, it must have been in Beaumont that he had his start. Cause everything that HitIer and Mussolini do, Negroes get the same treatment from you. You Jim Crowed me before Hitler rose to power, and you’re still Jim Crowing me right now, this very hour. Yet you say we’re fighting for democracy. Then why don’t democracy include me? I ask you this question, cause I want to know. How long I got to fight both HitIer and Jim Crow?”
-Langston Hughes

The following day, we see Joe clean shaven in a taut, starched uniform of the Military Police. Joe once again has a chance encounter with Pasquale, eventually discovering that the orphan stole his shoes. Demanding to know where he lives and how to recover his stolen shoes, Joe makes Pasquale take him to his home. So the two take the Jeep and shortly after, arrive at a cave. Inside, Joe is stunned to see dozens of poor men and women hobbling together what little a life they can in the aftermath of the war. The slum strikes a cord with Joe, it pierces something deep inside him, and upon laying eye on the cave slum, Joe ceases the charge to retrieve his shoes and in the next scene he’s seen driving away.

I must admit, pairing the downtrodden struggles of the post-war Italian poor and a black man returning to African-American ghettos of 1940s is a take I considered too nuanced for any non-black filmmaker of the era. Yet, here we are. The climax of episode two brought me to tears. The arc of understanding between an adult and child, black and Italian, with no common tongue between them is both subtle and bold. As soon as the episode finished, I knew I had a new favorite.